I am pleased to announce that I’ve finished the ninth and final book of the Wind of Destiny series.

I don’t know exactly when I began writing book one, A Hero’s Calling, but if I had to guess I’d say the journey began around August of 2015. It’s been three long years, but enjoyable to experience the characters and their stories.

Through stops and starts, and periods of focusing on other projects, I steadily wrote the books, one by one. I am so thankful to the readers who shared the journey with me. Now, it has come to an end, like all journeys have to, eventually.

END_OF_DOCUMENT_TOKEN_TO_BE_REPLACED

I have released a new book. Download a sample and check it out!

In ancient times, the dark god Kronos crafted weapons of war in his fiery lair. His worship has long been eradicated, his followers driven into hiding… and yet he remains…
Creatures of shadow are crawling through the land of Eloesus… they seek one man above all else: Theron, upstanding citizen, master swordsman, and veteran of many wars. As he flees, doom is falling over the land: clouds of fire hover over the ancient city of Thenai and infernal names not spoken in thousands of years thunder from the mountaintops.
A hero is needed. A wind of destiny is blowing, yet Theron is one false step from death.

I’ve had questions about various aspects of my world before. I wanted to point out a website where I put all my notes, written up as entries, as well as super illustrations that I have commissioned.

One entry I just updated is here: tp://vardhtabooks.com/fey-priestesses/

That part of my world is featured both in Fell Winter and Tide of War.

There are certain other entries with illustrations, but not many… yet.

Please do check it out!

I am happy to announce my new novel, “Tide of War” is available on Amazon. I had some technical issues with the pre-order system that I didn’t understand. I had this book finished long before I set it up; however, Internet gremlins conspired against me.

With this novel I blended elements of adventure, fantasy and chthonic horror. The cover was perfect for this novel, as the symbol of Zarubain where the novel is set is a lion on a blue field. The novel will only be $2.99 until it’s released on August 7, when the price will be raised to $5.99. I hope you take a look, and, hopefully, order. It’s currently available at…

A new print book of mine has been just released! This has an extensive glossary and a map, as well as numerous other features that have never been in any of my books before, including black and white illustrations in the glossary. The cost of the illustrations and other features mean it’s a bit more expensive than the other print books at $17.99, but I believe you will think it’s worth it. Send me an email, contact@aj-cooper.com, if you’d like a signed copy.

It should be available on Barnes and Noble soon.

(Pardon the awkward placement of the text — Amazon cut off the top part of the cover for some reason. It looks much better in physical form.) 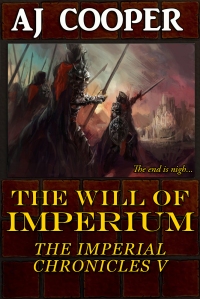 In a long-planned, perfectly executed coup, the Academies of Eloesus overthrow the Imperial government and transport a foreign army to the Empire’s shores, intending to remake the nation according to their utopian vision. As cities fall and the nation slips toward certain annihilation, the lone voice of Imperium calls out for a renewed rise of an empire, and a deluge of traitors’ blood.

The fifth and final book of the Imperial Chronicles series, which began in Unconquered Son.

Setting: The Empire and the Southern World Timeline: Around 1100 Y.E.

The Empire speeds toward a new century, anticipating new heights of prosperity and power but finding its triumphant march forced to a stumble. An official visit from the northman king, Gylles vis Bretagne, is laced with ulterior motives and may lead to a disastrous war. While the supernatural forces of shadow grow beyond the border, elements within the governmental elite tighten the noose. As the crisis deepens, six souls find themselves at the center of it all — six disparate lives, inexplicably yet intricately connected. Six SONS OF EMPIRE.

The fourth novel of the Imperial Chronicles. The first novel in the series is now free.